Here are some pictures from my recent practice walks, and one relating to WAND gear.

When I saw this same owl last fall, I was thrilled- it’s so rare to see an owl perched out in the open during the day, no? Yeah…it’s fake. To whoever put it up there: it’s not very nice to trick people like that.

From afar, I thought this object might be a turtle sunning itself on the side of the road. As I cautiously approached, I saw that it was actually a candy bar wrapper. But then, up close, I realized I had been half right to begin with! 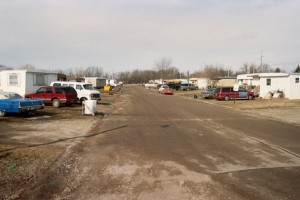 Trailer parks usually aren’t the cheeriest places for a stroll, although I’m sure there are some that are well-groomed and inviting. This one had plenty of garbage strewn about. Maybe it’s patronizing of me, but I’ve been making a point of including the town trailer parks on my walks. They’re part of the community, too, even though many of the homes leave a lot to be desired aesthetically. 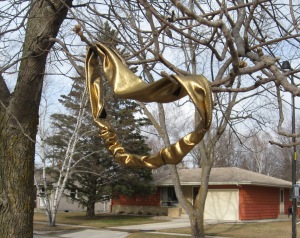 And now for a very important question: should I take this gold lamé headband on the WAND? Cons: scratchy, won’t absorb sweat, impractical. Pros: bling, fun, flair. What do YOU think??

This last picture is the only one I didn’t take, but I had to include it because I had such a wonderful time walking through this area. The Munsinger Gardens in St. Cloud, MN, must be gorgeous in the summer, when this picture was obviously taken. When I walked through them on Monday, there were no blooms or even green leaves yet, but the intertwining cobblestone pathways, the tall trees, and the layout of the gardens still made it a lovely place to pass through. There are several swing benches nearby, a wishing well, and a fountain. I hope to return there this summer.